Dynamic Bracing Solutions™
"It's Worth the Challenge!"
Home  /  ...

It is DynamicBracingSolutions'™ purpose to provide solutions to deficiencies in locomotion on an individual basis. Providing solutions that enable a person to reach their potential outcome. Rehabilitation is to restore to a former capacity; state of efficiency; condition of health or useful and constructive activity. The most important factor is caring to make a difference. DynamicBracingSolutions™ is really about people helping people to regain function otherwise lost to disability.

Unity of purpose is the primary motivation. Orthotic services cannot be separated from Physical Therapy services. Every member of the team is responsible to the goals of rehabilitation. The client is ultimately responsible for the outcome with the help of the team clinicians.

To enable the ultimate goal of efficient walking requires much more than making a brace for a limb. It requires a greater understanding of the Individual in need. Efficient walking must be planned. There are a plethora of issues that must first be recognized before they can be solved. The bracing of the future will no longer just be molded materials around a limb; it will improve the alignment of the limb better than ever before, it will offer more functional possibilities, the movement strategy and the brace will be designed to work together symbiotically for the person as a Solution based program, with efficient outcomes planned. In order to enable a person to reach new potentials, even potentials once thought unobtainable, a studied commitment by all involved is necessary.

We have all seen amputees walk and run with ease and grace. Why can't a brace user do that? Even people with very low-level paralysis involvement rarely can emulate what many amputees can do functionally. Why is that? The Solution development is more complex. Utilizing new clinical theories in lower-limb orthotics that are evidence based can enable a brace user to stand, walk, and even run more efficiently. New bracing solutions are now making it possible to close the gap between prosthetic's and orthotic's capabilities. These new bracing solutions are based on new or expanded concepts, designs, and advanced materials.

The new bracing solutions only enable an individual with a greater potential than they had before; what the person does with it is critical to the outcome. The people who have faced the challenge and overcame the obstacles are living a better life. Outcomes once thought unobtainable are now being realized. Activities thought lost forever are being reclaimed. A majority of the users can do more and use less energy and experience a reduction in fatigue. Many have a reduction in pain and many people feel stronger. Balance and security are improved with better mechanics and patterning; standing and walking are more efficient. Majority of individuals have downgraded the need for other assistive devices (canes, crutches) and majority of users are more active. Some people have regained muscles or muscle strength caused by disuse atrophy syndrome(s). Psychological benefits for users and members of their support systems have been witnessed.

Click below to see examples of our video's on a few results and testimonials.
See more >

All braces are measured, fit and DBS Fabricated for each client's needs. (A sample AFO shown.)
See more > 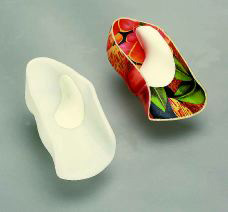 There often is a device that can alleviate premature wearing of joints, ligaments, muscle, and bones, along with preventing ulcers, reducing or eliminating pain, and improving balance.
DBS orthotists work closely with a patient's physician, and can send an elaborate evaluation report with recommendations back to the physician.

As necessary as surgery often is to relieve foot problems, specialists in foot care are now seeking more and better ways to treat and rehabilitate, where possible, without surgery. Thus, the field of foot orthotics or "pedorthotics" has become increasingly important and popular.

Foot orthoses have been a specialty of DynamicBracingSolutions™ for a number of years. Our orthotists have received specialized training as part of their education. In addition, everyone involved in pedorthic work at DynamicBracingSolutions™ receives the latest training, educational materials, and information about the field, staying closely abreast of the latest product advances and innovations.

There are, for example, several alternatives currently available for managing foot deformities and painful feet without surgery. They include various types of foot orthoses or arch supports, orthopedic shoes, shoe corrections, pads, and other control devices. Extra-depth shoes are also often recommended when a foot orthosis is used, especially for diabetic or neuropathic feet.

One type of corrective device is a Rotational Control foot orthosis that replaces the University of California of Berkely Laboratory (UCBL) insert which is used to correct hindfoot, midfoot, and forefoot displacements. Its advantages over the previously popular UCBL are that it includes rotary control forces in all three planes, thus offering greater control of the foot.

Through proper pedorthic treatment, a patient can achieve a much-improved alignment which increases the success rate and comfort level. Some foot problems that were treated surgically not long ago can now be treated conservatively.

There are a multitude of low-profile foot orthoses to solve different problems for the foot, knee, hip, and back. It helps to think of the foot as the front end alignment of a car. If the alignment is off, other parts wear prematurely, with undue stresses on parts not designed to withstand them. The human body is similar, except it's not so easy to replace those parts, and the replacements are not nearly as good. The human body often has pain associated with this uneven wear. The best cure is preventive - as soon a problem can be diagnosed.

There often is a device that can alleviate premature wearing of joints, ligaments, muscle, and bones, along with preventing ulcers, reducing or eliminating pain, and improving balance.

DynamicBracingSolutions™ orthotists work closely with a patient's physician, and can send an elaborate evaluation report with recommendations back to the physician. Most physicians are unaware of the advances in orthotic systems, pedorthists need to educate them on what is now possible.

Marmaduke Loke, CPO, recently gave a lecture to several physicians and showed them his functional outcomes. One physician actually said to him, "What are you trying to do, put orthopedists out of work?" He was shocked at first, but then took it as a compliment and replied, "Absolutely not! I am trying to enhance their practice."

He then asked, "Could you imagine clients telling other clients, 'Go to Dr. XYZ, who referred me to someone who was able to solve my problem non-surgically!'? That doctor would probably get a nice reputation," Marmaduke commented.

To schedule for your organization or more on locally scheduled events, contact us.
A few Titles from the lecture series... 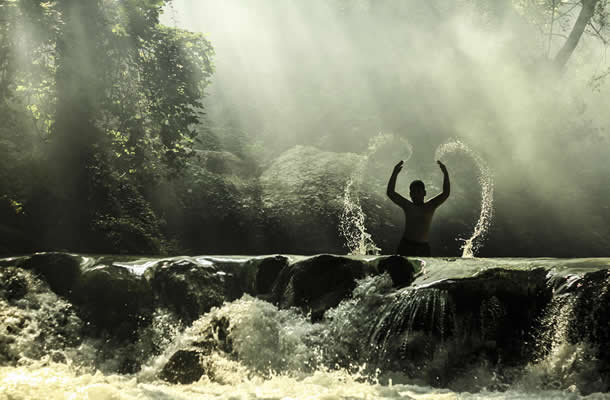 Do You Know What You Are Paying For?

Do You Know About Your Body?

"The challenge, was it worth it? Yes! Definitely worth it. There are times that I can sort of march, that I was never able to do before. I can go longer distances when I walk my dog and I don't feel like my knee is going to buckle." -- M.E. MD

"The challenge was worth every bit, I mean, it just gets you all excited about (it) and you want to go do it again. That's what life's about, it's challenges and pushing yourself to another goal." -- E.W. All American Over Sixty TriAthlete

Wounded Warrior takes another step towards his goal
November 12, 2009
By David P. Newman,PT,DPT,OCS

Copyright © 2000-2016 DynamicBracingSolutions™ All Rights Reserved.
Back To Home Page